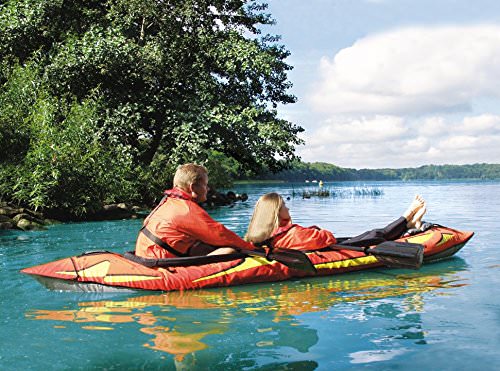 The first time you see an inflatable kayak, you might think it’s not safe at all. How can something that looks like a blow-up pool be safe for the open water? Well, as with anything related to boating, there are risks involved with an inflatable kayak. However, the risks are no different from any other type of boat. There are many things to consider when deciding if an inflatable kayak is right for you and your skillset. There are many dangers linked to using small vessels in general; lakes and rivers can be unpredictable, and large bodies of water can be home to some treacherous creatures. But these factors apply whether you’re in a small fiberglass vessel or an inflatable one.

What are inflatable kayaks?

Inflatable kayaks have been around for decades. They’re relatively simple in design and construction, typically consisting of an inflatable hull, some deck rigging, and a few seats. The hull is typically made of either a vinyl or PVC material that’s been treated with UV protection to prevent it from breaking down in sunlight. The deck rigging may vary from kayak to kayak but commonly includes tie-downs, bungees, and foot braces. Most inflatable kayaks use a sit-on-top design.

How Safe Are Inflatable Kayaks?

Before taking an inflatable kayak out on the water, make sure that it has no holes or other defects. Test it out in a pool or on a lake to ensure that it’s not leaking and that the seams are strong enough to withstand the water pressure. If you spot any issues, take it to a repair shop before taking it out on a real body of water.

Boaters of all kinds need to know their skill level and stay within their limits. The same goes for inflatable kayakers. If you don’t know how to handle an inflatable, stay on a smaller lake or river. You can always expand your skills and go out on the open ocean once you feel more confident at handling an inflatable.

No matter what kind of boat you’re using, you should always pay attention to the weather. If rain is in the forecast, put off your paddling plans for another day. If a storm is coming, find a safe harbor and wait out the weather.

Even if you know how to kayak and even if you have the steadiest of hands, unexpected hazards can arise on the water. Wearing a life jacket at all times while you’re in the kayak is a good safety precaution.

If you’re touring on a river, avoid going against the current. This will help you avoid unnecessary strain on both your muscles and your equipment. If you’re planning to go with the current, keep an eye out for strong eddies and currents that you might get caught in.

Be Cautious Around Wildlife

Even if you’re paddling on a lake or a slow-moving river, you’re still in the wild. Be cautious around wildlife that may be in or near the water.

Most canals are too narrow to fit an inflatable kayak. Even if you were able to squeeze the kayak into the canal, you probably wouldn’t get it out. Stay away from canals unless you’re in a fiberglass boat.

While you’re on the water, make sure to stay clear of areas with heavy boat traffic. Avoid going near large vessels, and keep a respectful distance from ferries and other large craft.

Final Words: Is An Inflatable Kayak Right for You?

Inflatable kayaks are a fantastic option for people who want to kayak but don’t have the funds or space to store a regular kayak. They’re also great for people who want to paddle in a variety of bodies of water. You can take them out on lakes, rivers, and even oceans! Before buying an inflatable kayak, make sure you understand the risks associated with them and that you have the proper gear to stay safe.

What Causes a PFD to Wear out Over Time?

We use cookies to ensure that we give you the best experience on our website. If you continue to use this site we will assume that you are happy with it.OkRead more