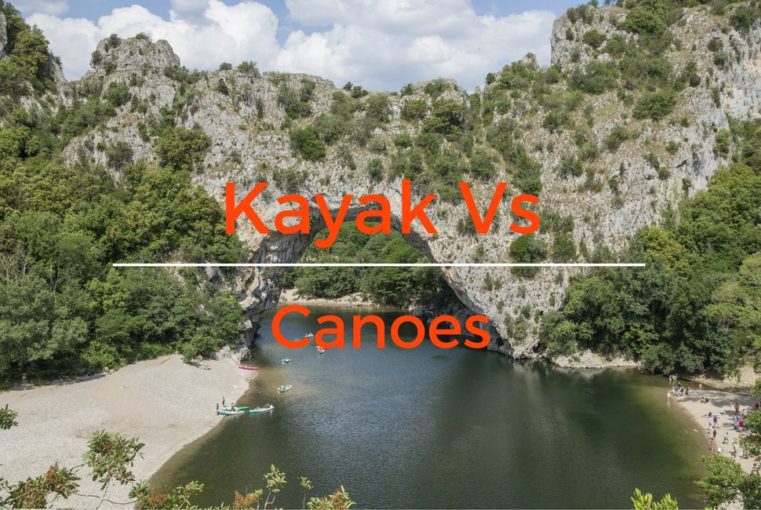 Canoes and kayaks are often confused or used interchangeably. However, despite this common practice, the two watercraft are actually very different, in both their origins, designs, and functionalities. This article will define both vessels, comparing and contrasting them in order to better understand their differences.

After reviewing the differences and similarities between kayaks and canoes from their history to their design and functionality, you should be able to easily discern the difference between the two moving forward. Here are their major differences listed for easier reference:

Canoes originated in the Caribbean where islanders chopped down the thick trunks of trees and hollowed them out. These waterproof vessels were perfect for traveling from island to island. Native Americans of North America also used canoes to travel by waterway and as vessels for catching fish; however, their version of the canoe, as it developed over many years, was less primitive.

They manufactured their canoes out of the lightweight bark of birch trees, making the canoes swifter and allowing them to carry more weight. By the late 1700s and early 1800s, the lucrative fur trade had drawn many foreigners to the land of the “New World”, particularly the French in the region of modern-day Canada.

These men discovered the Native and his canoe and created in their image canoes that could carry as many as ten men plus whatever bounty of fur they had managed. It was at this point in history, the canoe began mass production with the French installing the first-ever canoe manufacturing business in Quebec

The Design of Canoes

The early structure of canoes was fabricated using natural, local resources, particularly trees. The form of the canoe was modeled using thin, pliant slats of wood to create the well-known curves of the water vessel. These slats ran both vertical and horizontal and were kept in place using delicate shrub or tree shreds that were flexible enough to twirl and tie over the meeting points of two structural pieces.

These junctures were reinforced with the utilization of tree resin, or gum, which was tacky and sticky but would dry and harden, acting as a water-proof glue. Native Americans favored the elm, birch, and spruce trees for canoe supplies because their bark was lightweight, their wood was pliable yet strong, and some produced the sticky resin that bolstered the sturdiness and longevity of the canoes.

The modern canoe has not changed too much in terms of appearance, although they can vary in length, width, or color. The open top of the canoe is still included in its design, as well as the inclusion of seats. Today, wood is often the choice for canoe craftsmen to put a classic, aesthetically-pleasing appearance on the canoe.

However, many other materials are accessible to us now such as fiberglass, carbon, aluminum, royalex, kelvar, and polyethylene. Each material differs in the weight of the canoe and therefore its maneuverability, but no matter material, all feature the same, classic silhouette of the canoes Native Americans once used.

The origin of kayaks differs from canoes mainly due to the region and materials used. However, both watercraft were created for the same reason: a need for transportation on waterways for hunting and fishing purposes. Kayaks are also inventions of early native peoples, particularly in the cold, northern regions of Alaska, the uppermost strip of Canada, and Greenland. This spread of the region included the indigenous tribes: Eskimos, Inuits, and Kalaallit (of Greenland).

By 1905, the kayak’s design had been copied and patented by Europeans, and by the ’30s kayaks were being mass-produced and used for sport and recreation rather than for hunting or fishing. Eventually, the manufacturing of plastics brought about fiberglass which became an ideal material for the kayak as it was lightweight and ensured longevity to the water vessel.

The evolution of the kayak even leads to it being added to the Olympics. Today, the kayak is a popular choice for outdoorsmen and women who enjoy paddling through lakes, rivers, and even in the ocean. Check Best Kayaks.

The Design of Kayaks

Northern-residing natives of the Americas and Greenland would typically utilize seal skins to waterproof their kayaks. The skins were ideal for watercraft because they were buoyant, especially if leftover organs were utilized, such as the seal’s bladder which may have acted like an inflatable pool toy, keeping the weight of the kayak, its passengers, and cargo afloat.

A major difference in design for the kayak versus the canoe was that, due to freezing, potentially fatal, waters the kayak was built to give its paddlers the ability to stay secure in their vessel if anything unfortunate were to happen. If the kayaks were built in the image of a canoe, with an open-top, a mistake or bad turn of events could have ended with death. The covered top of the kayak was also useful to its users because it kept passengers warm and any cargo safe from being swept away or damaged in rough, choppy waters.

Modern-day kayaks are easy to tell apart from canoes. One defining characteristic is typically their more angular hull and bow, as well as their slimmer body. Another is that kayaks call for the use of a double-bladed oar or oars, while canoes use an oar with a single blade on just one end.

Canoeing vs Kayaking | Comparing the Functionality of Canoes and Kayaks

When it comes to defining the kayak and canoe, we’ve found that their origins differ in where and who but not so much how or why. However, despite their similarities in history and minor variables in design, the kayak is best suited for heartier, adventurous activities while the canoe is better suited for use in peaceful settings.

These differences in their functionalities derive from their slight distinctions in design. For instance, the canoe’s wide beam, or width, contributes to its stability on the water, but also may make it more difficult to steer or turn in a quick fashion.

Kayaks are more aerodynamic in shape, much like sports cars, they are built not only for speed but also for the capability to make quick turns. Due to these differences, canoes are more functional on calm waterways, such as ponds or lakes. In these settings, a passenger or passengers of a canoe are likely to enjoy fishing, reading, bird watching or bird feeding, or simply, just the joy of the views, much like a water-driven hiker. It’s also a great source of exercise for the arms.

Although kayaks are just as functional in the serene settings that welcome canoes, the kayak offers more of a workout, more activity than paddling a canoe. For this reason, kayaks are popular choices for serious individuals not afraid of a little sweat and who are open to traveling through rougher or colder waters.

Due to its design – a pocketed seat within a covered top – the kayak requires a lot more concentration and core strength to maneuver properly. Even on flat waters, after a day or even just an hour of kayaking, one’s body will be sore from keeping the water vessel upright and moving in desired directions.

Kayaks are also able to maneuver choppier waters, such as strong rivers or the waves on an ocean, due to their slimmer physique; their covered top also offers shelter from spraying water.

Kayak or Canoe is best for fishing?

It depends. If you have stability issues, then a canoe would be a better choice than a kayak. However, a lot of kayaks are specially built to make a better fishing experience. These fishing kayaks come with necessary adjustments and the ability to go fishing easily.  On an angler kayak, you will have the option to attach your fishing gear like a fishing rod, underwater fishing camera, fish finder, and more.

Kayaks are used to be used on both slow and fast water. So there are kayaks that will have better tracking than canoes. A lot of people use kayaks for creeking, whitewater, and for touring purposes. Most of these kayaks have fantastic speed. On the other side, canoes are used to be used on still water. So if speed is an issue for you, you should choose a kayak over canoes. Here: Best Whitewater kayaks.

Usually, canoes will have better stability than a kayak. Canoes are made to be used for calm water, so a newbie might take the benefits of having more space on canoes. However, a lot of kayaks have great stability. A good kayak will have better primary and secondary stability. A sit-on-top kayak offers an open deck to move easily. Thus, you get better stability with the sit-on-top kayaks.

We use cookies to ensure that we give you the best experience on our website. If you continue to use this site we will assume that you are happy with it.OkRead more