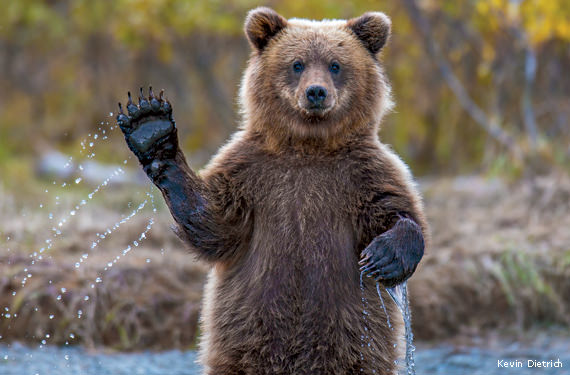 What would you do if a bear wants to eat your kayak? Would you yell or beg him to stop? A Youtuber named Mary Maley encountered a Alaskan bear ,who was sniffing around her kayak.

The bear moved away from the kayak for a while and she thanked it. However, as the bear approaches to her , she had to use a pepper spray which was intended to drive away the bear from her path. What happened next actually shocked her as the bear moved back to the kayak and started sniffing it again. She started to yell and beg to the bear not to eat her kayak. But , who cares ; it’s a bear anyway.

She shouted with “Bear! Bear! Stop that, bear!” she howls. “Gosh darn it, why are you doing that?… It’s not even food, it doesn’t even taste good! It’s just plastic!”

She even walked quite close to that bear and kept begging to leave her kayak alone. No sane person would go as close to a bear like she did. Despite her continuous pleas , she couldn’t save her kayak as the bear ate it anyway and flipped the kayak. You can see the video below.

However, she managed to overcome this. Let’s hear from her voice:

“Shortly after the bear left and I drug (sic) the kayak back to the cabin door step,” Maley writes on her YouTube page. “Then I swam to the S/V anchored in the bay. They did not have their radio on and I feared I would be stranded! The German flagged S/v Caledonia took me and my things to Wrangell where I am trying to repair my kayak now.”